Striking panoramas are found in :
Tours in Sikhim and the Darjeeling district / by Percy Brown ; revised and edited with additions by Joan Townend ; with frontispiece, contours and map.  Calcutta : W. Newman & Co., 1944. (Archive GB 61) given by Brigadier F.R.L. Goadby.


This book is held in the Archive collection of the Cambridge Centre of South Asian Studies which also has donations including logistics surveys and histories of mountaineering and the developments of climbing techniques.

One of the earliest mountaineering books held is: Notes of wanderings in the Himmala : containing descriptions of some of the grandest scenery of the snowy range, among others of Nainee Tal / by Pilgrim [T.J. Saunders], Agra, 1844. (Archive (235.24):910)  a scanned copy of which is also available from the Hathi Trust.

One of J.H. Hutton's donations : Notes on walking around Shillong, by W.A. Allsup, 1934, (Archive Hut 4) was republished and launched at the Shillong Club in 2017. The Shillong Times in an article dated 23rd July 2017 notes :

Allsup’s book represented the first effort to mark out a series of walks around Shillong and to recommend these walks to residents and visitors.
Horse riding was then the main conveyance for work or pleasure and these tracks, no doubt, provided convenient paths for walkers. While it is not known as to how successful Allsup’s efforts to promote walking were, the well-worn horse trails were often the starting points of his hiking trips.

From the same collection at Archive IS 231 is a history of early exploration : When men and mountains meet : the explorers of the Western Himalayas 1820-75 by John Keay. London : John Murray, 1977,  Road to Rakaposhi by George Band. London : Hodder and Stoughton, 1955, (Archive IS 152)  which was dedicated to the Cambridge University Mountaineering Club and a report from some members of that Club : Cambridge Hindu-Kush Expedition 1966 (Archive IS 406). 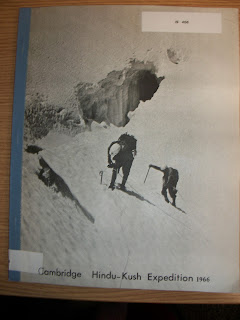 The collection also includes publications by Eric Shipton who in 1957 was awarded the CBE for contribution to the conquest of Everest. (Archive IS 102) That untravelled world : an autobiography. London : Hodder, 1969. (Archive IS 55) Annapurna, conquest of the first 8000-metre peak (26,493 feet), by Maurice Herzog; translated from the French by Nea Morin, and Janet Adam Smith; with an introduction by Eric Shipton. London : Jonathan Cape, 1952 and (Archive IS 97) Mountains of Tartary : photographs by the author. London : Hodder, 1951. An article by Jonathan Westaway (2014) That undisclosed world: Eric Shipton's Mountains of Tartary (1950), Studies in Travel Writing, 18:4, 357-373, "recounts Eric Shipton's mountaineering and travels in Xinjiang during  his  two  postings  as  British  Consul-General  in  Kashgar  in  the  1940s." but goes on to argue that Shipton would have been prevented by his role as a British diplomat in China from publishing anything that revealed details of his role in Great Game politics or the full extent to which he was an agent of the state involved in diplomacy, intelligence gathering and imperial surveillance.