A conference on Shakta traditions, organised by the Oxford Centre for Hindu Studies in collaboration with the Section for the Study of Religion at Aarhus University, will take place at Somerville College, Oxford on 10th and 11th September 2011.  Registration costs £15 for the weekend. All are welcome.
See: http://ochs.org.uk/research/sakta-traditions

The conference aims to present an interdisciplinary survey of Śākta history, practice and doctrine in its diversity as well as to convey something of the Śākta religious world view that is distinctive and sets ‘Śāktism’ apart from other South Asian religious traditions.

For a detailed programme of speakers and talks, see: http://ochs.org.uk/research/sakta-traditions
Posted by Rachel Rowe at 15:45 No comments: 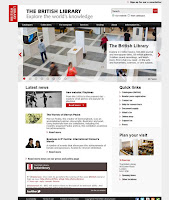 Recently we introduced a new home page and search facility on our website. This new home page, which is the result of extensive user testing, has new navigation labels, a rotating carousel of images and dropdown menus to help users find our full range of web content and services much more easily.
While the new home page looks quite different, the rest of the website is unchanged. So there is no need to edit your bookmarks or favourites. Meanwhile, a major project to redevelop a new website from scratch is already underway.
The new search ('Explore the British Library') is a major change, as it now allows users to search much more than our web pages and main catalogue. It retrieves twice as many journal article records as before, as well as sound recordings, 'trade literature', theses, datasets, archived UK websites, maps and music scores - adding up to over 60 million items.
Web page and catalogue results appear in separate tabs, and it is is easier to refine your results than before.
Please let us know what you think webeditor@bl.uk
You can also tweet your comments using #BLnewhomepage 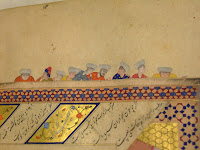 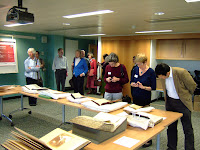 Our 85th conference was held on 1st July in Edinburgh and spread over two days. On day 1, Dr Andrew Grout was our attentive host at the University of Edinburgh Library, and between talks we were given a tour of the refurbished building and got a chance to see some of the South Asian collections.

On Saturday, Dr. Henry Noltie was our guide to the Library of the Royal Botanic Gardens, and we had a behind-the-scenes look at a selection of the Garden's fabulous collections of dried plants and rare books, including items from the collection of Francis Buchanan Hamilton.

The Flight of the Hog Wild

A recent enquiry to the National Library of Scotland about the Indian Medical Service led me into a fascinating World War II journey which began with an American B-29 bomber.
On August 29th 1945 the Hog Wild was on a POW supply mission when it was shot down by Soviet fighters. Its 13-man crew was interned in Konan POW camp (now Hungnam, North Korea) for sixteen days while Soviet and American commanders negotiated for their release.
The camp already held 354 Allied POWs (mostly British) who were captured during the fall of Singapore in 1942. One of the prisoners was Canadian Major Harry V. Morris (pictured below), who had served in the Indian Medical Service.

Born and educated in Newfoundland, Morris graduated with a medical degree (with surgery specialty). He spent several months studying at London's Royal Military College before arriving in India in early 1939. He was stationed at the Indian General Hospital, Lahore and then moved to No. 12 Indian General Hospital in Malaya.

It is thought that he was captured by the Japanese in February 1941, held first in the notorious Changi Prison in Singapore and then in a North-East Korean POW camp. His wife and two children escaped Singapore. Major Morris was transferred to Konan, imprisoned by the Japanese for a further two years; he was one of five Allied officers at the camp. The men laboured long hours under extremely hazardous and strenuous conditions at a nearby carbide factory (pictured below), although the Japanese wouldn't permit an officer from doing any work of the sort. The crew of the Hog Wild were released in mid-September 1945; Major Morris and his fellow POWs were finally freed and repatriated a week later. The aircraft crew talked to the American Press, revealing the people, places and events surrounding the downing of the B-29. 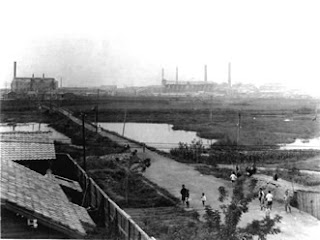 You can read much more about the Hog Wild in a forthcoming book and the book's comprehensive website.

Thanks to Bill Streifer (New York) and Heather Home (Queen's University Archives) for the information. The photo of Major Morris was supplied by John Mill, son of Lieut. Ronald Mill, the sole Australian officer at the camp. Photo of the Hog Wild taken from The Flight of the Hog Wild website.

Posted by Francine Millard at 11:47 No comments: 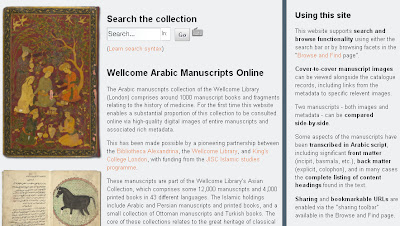 Arabic Manuscripts Online is a digital manuscripts library, accessible for free, based on the Wellcome Library's Asian Collection.  It includes manuscripts in Arabic and Persian which have been photographed in their entirety, and can be viewed in detail alongside comprehensive manuscript descriptions.  Researchers can also compare two manuscripts side-by-side to illuminate the differences.

Significant passages in the manuscripts, such as the incipits, basmala, explicits and section headings (for most but not all manuscripts), are fully transcribed, and extensive physical descriptions have been recorded by conservation specialists for most of the manuscript descriptions.

It is also possible to explore the content of the online catalogue more selectively, where manuscripts may be browsed according to their categories or searched via the full text search facility. Users can search using the old Arabic alphabet through a virtual keyboard, matching the original content of the manuscripts. The results of the searched manuscripts may be further narrowed down through the faceted filters, which retrieve more precise results for the researcher's convenience.  There are themed help pages and a useful glossary.

Arabic Manuscripts Online was made possible through the Wellcome Arabic Manuscript Cataloguing Partnership (WAMCP) and combines the efforts of the Wellcome Library, the Bibliotheca Alexandrina and Kings College London Digital Humanities Department.  It is funded by JISC and the Wellcome Trust.
Posted by Rachel Rowe at 10:44 No comments: