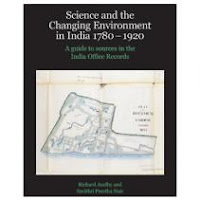 The India Office Records in the British Library document the activities of the English East India Company and the British administration of India from 1600 to 1947. This guide makes a great part of this material relating to science and the environment material newly accessible via sign-posted routes into the archives and detailed lists of the principal records. It also gives the historical and archival context of the documents, outlining the British involvement in science in India and explaining how the records are organised.

The guide is arranged into the following sections: plant and botanic gardens; agriculture; forests and forestry; animals and animal husbandry; geology; meteorology; health and disease; irrigation and water control; communications and the built environment; ethnography; landscape and topography.
Posted by Jan Usher at 09:29 No comments:

SAALG members who visited the Ashmolean as part of this summer's SAALG conference, will be especially interested in Eastern Art Online, a project of the Yousef Jameel Centre for Islamic and Asian Art at the University of Oxford. It provides online access to the Ashmolean Museum's Eastern Art department collections with special focus on the stories the objects have to tell.
Posted by Rachel Rowe at 09:41 No comments:

Held in partnership with the British Library, the Making Britain conference will explore the formative contribution South Asian writers, activists and intellectuals made to shaping Britain’s literary, political and cultural life in the period 1870-1950. In so doing, it will highlight the research of the collaborative three year interdisciplinary research project Making Britain: South Asian Visions of Home and Abroad, 1870-1950, funded by the AHRC from 2007-2010 and linking the Open University with the Universities of Oxford, London and SALIDAA (South Asian Literature and Arts Archive).

By focusing on the presence in Britain of South Asians in 1870 - 1950, and on the numerous modes in which they inflected ideas of Britishness and laid the ground for the construction of new multiple identities, the Making Britain conference seeks to heighten awareness of the breadth and depth of South Asian contribution to British culture.

A hot night in Bengal


If you haven't yet read this Sunday's posting on the Wellcome Library's blog, I can promise you an entertaining read!  Chris Hilton quotes from an East India Company letterbook for Dinapore District, dating from 1840-1841, which is currently undergoing conservation in the Library.
Posted by Rachel Rowe at 17:01 No comments: