Interested in Indian vernaculars, Persian, Sanskrit? In the relations between various yogic traditions? Then please have a look at the newly released Early Modern India: Literatures and Images, Texts and Languages, edited by Maya Burger and Nadia Cattoni.

This book presents recent scholarly research on one of the most important literary and historical periods of the Early Modern era from a wide range of approaches and perspectives. It contains a selection of contributions presented at the 12th International Conference on Early Modern Literatures of North India which provide fresh and new material as well as innovative methods to approach it. The organizing principle of the volume lies in its exploration of the links between a multiplicity of languages (Indian vernaculars, Persian, Sanskrit), of media (texts, paintings, images) and of traditions (Hindu, Jain, Sikh, Muslim). The role of the Persian language and the importance of the translations from Sanskrit into Persian are discussed in light of the translational turn. The relations between various yogic traditions, especially of Nath origin, from Kabir and other sampradayas, are reconsidered.
Burger, Maya and Nadia Cattoni (eds.). Early Modern India: Literatures and Images, Texts and Languages. Heidelberg; Berlin: CrossAsia-eBooks, 2019. - 358 p. with coloured illustrations. ISBN (PDF) 978-3-946742-46-3; ISBN (Hardcover) 978-3-946742-45-6. https://doi.org/10.11588/xabooks.387 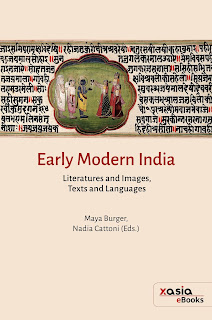 Posted by Nicole Merkel-Hilf at 09:26 No comments:

Spears collection in the Centre of South Asian Studies

Over 80 books and 74 boxes of papers were bequeathed by T.G.P. Spear 1901–1982) to the Archives of the Centre. The papers include reprints of Spear's articles for the fifteenth edition of Encyclopaedia Britannica, 1974 and his research notes. The book collection includes works published in the eighteenth and early nineteenth centuries.

Dr (Thomas George) Percival Spear was a Lecturer at St Stephen's College, Delhi 1924-40 and held various posts in Ministry of Information and Broadcasting, Government of India 1940-45 and was subsequently Bursar of Selwyn College, Cambridge 1945-70 and Lecturer in History, Cambridge University 1963-69.


The oldest books in the donation are Archive SPE 1 An account of the war in India : between the English and French, on the coast of Coromandel, from the year 1750 to the year 1760. Together with a relation of the late remarkable events on the Malabar coast, and the expeditions to Golconda and Surat; ... / by Richard Owen Cambridge. Dublin : printed for George and Alexander Ewing, 1761, which is also held in Cambridge University Library,
Archive SPE 19 The history of Hindostan; : from the earliest account of time, to the death of Akbar; translated from the Persian of Mahummud Casim Ferishta of Delhi: ... With an appendix, containing the history of the Mogul empire, from its decline in the reign of Mahummud Shaw, to the present times. / By Alexander Dow. In two volumes. London : printed for T. Becket and P. A. de Hondt, 1768, which is also held in the Parker Library of Corpus Christi College,

and unique to Cambridge but has been digitized from an American edition by the Hathi Trust Archive SPE 4 Grant, Colesworthey, 1813-1880. Lithographic sketches of the public characters of Calcutta, Calcutta : W. Thacker & Co, 1850, containing presscuttings and a useful summary of the characters illustrated.