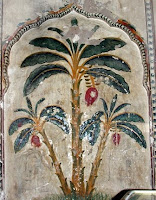 The following lectures will be held at the RAS in London:
Wall Paintings in a Special Room of the Sikh Prince Kharak Singh’s Haveli
by Nadhra Khan (Lahore University of Management Sciences and Charles Wallace Fellow 2010-11, SOAS)
Monday 4th April 2011, 6 pm

Megasthenes and Mauryan-Seleucid Relations: Fact or Fiction?
by Sushma Jansari (University College London)
Wednesday 20th April 2011, 6.30 pm.
N.B. This is one of two lectures that evening in the RAS Student Lecture Series.

All lectures at the Royal Asiatic Society, 14 Stephenson Way, London NW1 2HD.
No charge, everyone welcome. Lectures will be followed by a drinks reception.
Posted by Kathy Lazenbatt at 11:32 No comments:

The British Library and family history website findmypast.co.uk are to digitise a treasure trove of family history resources held by the Library, making them available online and fully searchable for the first time. The project will involve the scanning of UK electoral registers covering the century that followed the Reform Act of 1832, along with records of baptisms, marriages and burials drawn from the archives of the India Office.

When available online, these collections will enable historians, genealogists and family history researchers to make connections and track down details of ancestors and others at the click of a mouse – work that would previously have necessitated visits to the Library’s Reading Rooms and many hours of laborious manual searching. The British Library holds the national collection of electoral registers covering the whole of the United Kingdom. The registers contain a vast range of names, addresses and other genealogical information.

The other holdings included in the large-scale digitisation are drawn from the archives of the East India Company and the India Office. These records relate to Britons living and working in the Indian sub-continent during the eighteenth, nineteenth and twentieth centuries, up to Independence in 1948. They include over 1,000 volumes of ecclesiastical returns of births, marriages and burials, together with applications for civil and military service, and details of pension payments to individuals.

Antonia Moon, curator of post-1858 India Office Records said, “These records are an outstanding resource for researchers whose ancestors had connections with British India, whether as servants of the administration or as private inhabitants.”

Simon Bell, the British Library’s Head of Licensing and Product Development, said: “We are delighted to announce this exciting new partnership between the British Library and findmypast.co.uk , which will deliver an online and fully searchable resource that will prove immensely valuable to family history researchers in unlocking a treasure trove of content that up to now has only been available either on microfilm or within the pages of bound volumes. The Library will receive copies of the digitised images created for this project, so as well as transforming access for current researchers, we will also retain digital versions of these collections in perpetuity, for the benefit of future researchers.”

Elaine Collins, Commercial Director at findmypast.co.uk, said: “We’re very excited to be involved with this fascinating project. The electoral rolls are the great missing link for family historians: after censuses and civil registration indexes, they provide the widest coverage of the whole population. To have Irish and Scottish records alongside England and Wales is also a huge advantage. These records will join the 1911 Census, Chelsea Pensioner Service Records and many more datasets available online at findmypast.co.uk, which enable people to make fantastic discoveries day after day.”
Posted by Penny Brook at 13:18 No comments:


I recently discovered an amazing resource for the study of Tibet.  The Tibet Album : British photography in Central Tibet, 1920-1950 provides online access to over 6000 digital images of Tibet, together with biographical information on the photographers, maps and access to the collection by date and place.
The original photographs are held in the Pitt Rivers Museum (Oxford) and the British Museum (London) and digitisation project was supported by the Arts and Humanities Research Council.
See: http://tibet.prm.ox.ac.uk/

The Museum of Archaeology and Anthropology at Cambridge University holds the Frederick Williamson Collection.  Frederick Williamson was a British Political Officer stationed in Sikkim, Bhutan, and Tibet in the 1930s. He was also an ardent photographer. Between December 1930-August 1935, he and his wife, Margaret Williamson, shot approximately 1700 photographs throughout the Himalayan region. As well as documenting the Williamsons' personal travels, the photos provide an unusually well-preserved and well-catalogued insight into social life in Sikkim, Bhutan, and Tibet during the 1930s.   Williamson also shot 23 reels of 16mm cine film while in Sikkim, Bhutan and Tibet. These have now been digitised and can be viewed online.

Also in Cambridge, the Centre of South Asian Studies holds three 16 mm films by Arthur John  Hopkinson, Political Officer in Sikkim, 1945-48.  One of these was taken on an extended tour of Tibet in 1947-48.  The Centre also holds transparencies and negatives taken in Tibet in 1934 by H.B. Hudson.  Colonel H. B. Hudson served in the Indian Army from the 1930s until Independence.  He travelled widely and spent one year in Tibet and made three survey journeys for the Himalaya Route Books. The Centre of South Asian Studies holds his memoir, A backward glance.
The Royal Commonwealth Society collections in Cambridge University Library hold a report by Colman Patrick Louis Macaulay (1848-1890), Secretary to the Government of Bengal, Report on a Mission to Sikkim and the Tibetan Frontier, with a Memorandum on our relations with Tibet, 1885, including 22 images. (ref. Y302592A) Macaulay undertook his mission in October-November 1885, and reported enthusiastically on the value of extending British relations with Tibet, but though he was chosen to lead a subsequent mission to promote this, an Anglo-Chinese treaty led to its abandonment.

For more information on the opening photograph of a Tibetan musician by Benjamin Simpson, see:  http://www.dspace.cam.ac.uk/handle/1810/1192
Posted by Rachel Rowe at 15:24 No comments: