The completed Colonial Film catalogue brings together films from three collections - the British Film Institute (BFI), the Imperial War Museum (IWM), and the British Empire & Commonwealth Museum (BECM). The catalogue uses various tools to enhance the apparatus for researchers consulting these collections. Most important of these are two extra fields of context and analysis, which position and examine a selection of the films in relation to the history of the British Empire. There are approximately seventy-five countries within the Empire represented within this collection.
The BFI collection contains approximately 1,200 films relating to Colonial Africa. There are over 1,100 titles covering India, South East Asia and the Middle East, with approximately 500 of these titles relating to India. The earliest titles within this collection include 70 from the turn of the century concerning the Boer War, as well as footage from India – for example Panorama of Calcutta – from 1899. There are films from local production units - for example, the Malayan Film Unit, the Jamaican Film Unit, and the Gold Coast Film Unit – and from established British producers, such as the Colonial Film Unit, and British Instructional Film - which produced the Empire Series between 1925 and 1928. These films were exhibited and distributed in a variety of contexts. There are instructional films made for African audiences – for example, Anti-Plague Operations in Lagos (1937) and the three BEKE films made in the 1930s; films intended for prospective British immigrants – for example Southern Rhodesia: is this Your Country? (1948); sponsored films for British schools - for example From Cane to Cube (1950); fundraising films for missionary work – for example Salvation Army Work in India, Burma and Ceylon (1925); films for children’s cinema clubs – for example Basuto Boy (1947) and Trek to Mashomba (1950) as well a large number intended for cinemas and non-theatrical sites at home and abroad. The collection includes documentary films, amateur footage, newsreels, actualities, travelogues, and missionary films, as well as over 200 fiction films.
The Imperial War Museum collection contains footage relating to pivotal moments in colonial history; for example the Malayan Emergency - Proudly presenting Yong Peng (1955); Voices of Malaya (1948); The Knife (1955); the British mandate in Palestine - Jewish Colonies in Palestine (1917); Allenby meets Weizmann (1918); Palestine Police (1946); and most notably the experiences of colonial troops in two World Wars. This footage includes extensive material filmed by Army and RAF photographic units during the Second World War, particularly in India, Burma and the Far East, much of which is still to be catalogued. The collection also includes newsreels from the War – most notably 138 editions of Indian News Parade, which ran weekly from 1943 to 1946 – as well as fiction titles, documentaries and unique amateur collections.
The British Empire and Commonwealth’s Film Archive contains approximately 1,700 films dating from the 1920s onwards which were shot mainly by British people living and working within the Empire. In addition, the archive contains government produced information and travel films, commercial documentary and news films, and television material.
Other similar projects include the Centre of South Asian Studies, University of Cambridge, online archive http://www.s-asian.cam.ac.uk/films.html, and Images of Empire http://www.imagesofempire.com
Annamaria Motrescu, Centre of South Asian Studies, University of Cambridge.
Posted by Rachel Rowe at 10:09 No comments:

﻿﻿
﻿﻿The next SAALG conference will take place at Edinburgh University Library on Friday 1st July (10.30-17.15). The theme will be Scottish connections and our speakers will explore various links between South Asia and Scotland. During the day there will also be an opportunity to take a tour of Edinburgh University Library and to view a selection of South Asian materials in the Centre for Research Collections.
In addition to our Friday programme we are also delighted to be able to offer a behind the scenes tour of the South Asian collections of the Royal Botanic Garden Edinburgh with Dr Henry Noltie on Saturday morning 2nd July from 10.30-12.00.
Speakers for Friday 1st July include:

﻿﻿﻿
﻿﻿﻿Professor David Finkelstein (Research Professor of Media and Print Culture, Queen Margaret University, Edinburgh) whose talk 'There and back: a book's voyage through colonial India' will use the circulation of an 1870s novel, originally published in Edinburgh, from Scotland to India and back again, to look at how nineteenth century texts were circulated, received and read in the South Asian colonial world.
Inbal Livne (University of Stirling) who will talk about the Tibetan collection of Lt. Colonel F.M. Bailey now held by the National Museums Scotland. Inbal will look at the nature of Bailey's collecting activities, his life as a Trade Agent for the British government in Tibet and his relationship with his home support network in Edinburgh.
Dr Avril Powell (Emeritus Reader, History Department, School of Oriental and African Studies, University of London) whose talk 'Scottish Orientalists and India: a family case study' will examine the 'distinctiveness' of the Scottish participation Empire by focusing on two brothers from Kilmarnock who both became 'scholar-administrators' in India's North-West Provinces in the nineteenth century.

Dr Margaret Mackay (former Director of the School of Scottish Studies Archives, University of Edinburgh) will introduce us to the work and South Asian collections of John Levy (1910-1976) in the School of Scottish Studies Archives. Levy was an independent ethnomusicologist who made over 700 field recordings in Asia and gathered associated visual material in the 1950s and 1960s. Dr Mackay's talk will include extracts of some of the recordings he made in North and South India and also material from Sri Lanka and Bhutan.
The price of the conference will be £20 payable on the day and this will include a buffet lunch. If you are interested in coming please contact Rachel Rowe or Helen Porter for the full programme or to book a place. If you need to book accommodation we can also provide a list of recommended places on request.
Rachel Rowe, SAALG Chair, Smuts Librarian for South Asian and Commonwealth Studies, University of Cambridge.
Email: rmr29@cam.ac.uk
Helen Porter, SAALG Secretary, Assistant Librarian, Royal Asiatic Society.
Email: hp@royalasiaticsociety.org Tel: 020 7391 9424
Posted by Helen Porter at 18:17 No comments:

This website holds detailed information on over 6000 films showing images of life in the British colonies. Over 150 films are available for viewing online. You can search or browse for films by country, date, topic, or keyword. Over 350 of the most important films in the catalogue are presented with extensive critical notes written by our academic research team.

The resource covers among others: India, Seychelles, Mauritius, Burma, Ceylon and The Maldives

www.srilankaresearch.org is a comprehensive website devoted to providing access to scholarly articles and information about Sri Lanka. This resource enables researchers to locate hard to find information resources not accessible via other bibliographic databases and sources.

The web site includes a searchable index to journal articles published in Sri Lanka from 1845 - to date. At present, the database contains over 10,000 citations from scholarly journals in the Humanities and Social Sciences, Agriculture and the Sciences.

This database of scholarly resources was supported by a research grant from the Librarians’ Association of University of California.

SOAS Library now has access to online bibliographies for Hinduism including Buddhism and Islamic Studies. Combining a research level encyclopedia and the traditional bibliography. The bibliography includes selective lists of citations to useful print and online resources as well as narrative guides.

This can be accessed from the A-Z list of databases from the following page:

http://www.soas.ac.uk/library/resources/a-z/k-p/
Posted by Farzana Whitfield at 13:55 No comments: 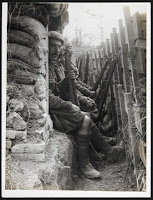 
This talk explores the role of South Asian soldiers in both world wars as part of the world's largest volunteer armies ever raised. It highlights their contributions as soldiers, journalists and commentators to the cataclysmic ‘national’ and global events of the First and Second World War and how this shaped their perception of Britain. The talk will also raise interesting questions how the crucial role of these soldiers is only gradually being brought to wider public attention and how slowly the historical lens is being refocused to include these stories in national commemorations of the wars.

Image: ‘Highlanders and Dogras in a trench with dugouts’ [Fauquissart, France]. Girdwood, H.D. Record of the Indian Army in Europe during the First World War. BL: Photo24/(294)
Posted by Penny Brook at 16:49 No comments: