The Lock Hospitals were part of a system to control the spread of venereal disease amongst troops in India in the latter part of the 19th century.
There are 5 volumes of reports on the working of these hospitals in the Medical History of British India project and they have returned from being filmed and scanned. Of all the collections in the project I find this the most extraordinary, giving lively and unrestrained accounts of the Imperialist implementation of the Indian Contagious Diseases Acts of 1864 and 1868.
To protect soldiers from disease prostitutes were encouraged to register and be examined weekly. However, some did not bow to the authorities and continued to ply their trade any way they could: “a woman, believed to have been a source of much mischief, was found in the lines, living in a rum-barrel.” (North-Western Provinces, 1878) Click on the image that accompanies this post to see the full page containing this quote.
The authors of the reports did not disguise their feelings about the native women, many of whom were driven to prostitution through poverty and addiction: “It is worse than useless retaining these hags on the register; they should be turned out of cantonments, and a younger, less repulsive class of women substituted. Until something of this kind happens the Lock Hospital is not likely to prove a success.” (R. M. Edwards, 1877)
Anyone interested in governmentality, colonial medicine and power, history of prostitution and military health will find these reports fascinating. Lock Hospitals were not just used in India; the London Lock Hospital opened in 1747 and as recent as the 1940s there was one on Fantome Island, North Queensland, which treated Aboriginal people.

See more on the Medical History of British India here

MPhil in Modern South Asian Studies
Posted by Rachel Rowe at 12:47 No comments: 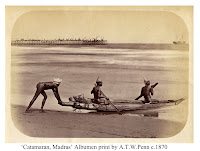 In pursuit of the past: the discovery of the life and work of A.T.W. Penn, pioneering photographer of South India / Christopher Penn.

Christopher Penn was a speaker at SAALG's December 2005 conference at the Kashmir Bhawan Centre, Luton.
Synopsis
In November 2000 Christopher Penn discovered an old letter
crumpled up behind the top drawer of his late father’s writing
bureau. It led to the discovery of a family – his own – of which he
had been unaware and knowledge of his great-grandfather Albert
Thomas Watson Penn, who was one of the pioneering
photographers of South India. He left home in England before he
was twelve and had started work as a photographer in the hill
station of Ootacamund in the Nilgiri Hills by 1865, the year in
which he turned sixteen. His work is now held in all the major
collections of nineteenth century photography.
Research for the book made use of newspapers of the time, held on
microfilm in the British Library, church records and the
photographs taken by A.T.W. Penn to piece together the details of
his life and that of his family. The Public Records Office in Kew
provided vital information on the tragic life of the author’s
grandfather who, having won the Distinguished Conduct Medal for
valour at the battle of Omdurman, riding in the same squadron as
Lt. Winston Churchill, and won a fortune eleven years later in the
Calcutta Derby Sweepstake, died a pauper and in disgrace.
Profits from the sale of this book will go entirely to three charities
in South India in equal parts: The Nilgiri Documentation Centre
(an offshoot of the Save the Nilgiris Campaign), The Dohnavur
Foundation and The Edhkwehlynawd Botanical Refuge, which is
concerned with protection and preservation of the fauna and flora
of the Nilgiris and care for the Toda, an aboriginal tribe.
Price £14:50 plus £2:50 p&p (£7:50 p&p overseas), available from
the author and publisher: C.F.Penn, Pendle, Burdenshot Hill,
Worplesdon, Surrey, England GU3 3RL
Tel/Fax: 44 (0) 1483 235 609
christopherpenn@btinternet.com
Posted by Rachel Rowe at 12:18 1 comment: 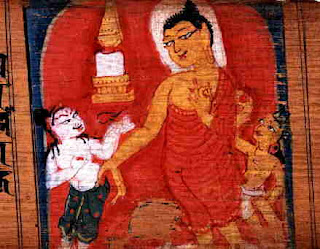 NACIRA, the National Committee for Information Resources on Asia, has its annual seminar in a couple of weeks' time. "Internet & Related Resources for Oriental Studies" will be held at Cambridge University Library from 10:30 Wednesday 17 September - 17:00 Thursday 18 September 2008.
Posted by Jan Usher at 16:21 No comments:

There has recently been much interest in East India Company ships’ logbooks as the information that they record about the weather can be used for modern scientific studies of climate change. For more information see