The Royal Commonwealth Society collections in Cambridge University Library hold the archives of Sir Frederick Tymms,  RCMS 20, one of the most significant figures in the development of civil aviation, referred to by his biographer, E.A. Johnston, as the 'Flying Civil Servant'.

Tymms served as an Observer in the Royal Flying Corps during WW1, then joined the civil aviation department of the Air Ministry 1920-1927 where he became involved in the development of air routes across Africa and India in the 1920s and 30s.  His archives document the difficulties of locating suitable landing strips at regular distances across each continent and the excitement at the opening of new aerodromes.

During the 1930s and much of the 1940s Tymms was in India where he was appointed Director of Civil Aviation 1931-1942. For a brief period in 1942-1943 he became Managing Director of Tata Aircraft Ltd, Bombay, and from 1945-1947 was Director General of Civil Aviation in India.  The Tymms archive is rich in photographs from this period - see: RCMS 20/2/ 10-19.  There are views of the grand Secretariat buildings in New Delhi, in which Tymms had an office, of the Delhi Flying Club which he joined, and of his travels all over South Asia looking for viable air routes and opening aerodromes.  Early air races are documented, such as the MacRobertson England-Australia Race in 1934, as are numerous air stations and aeroplanes.  Tymms took photographs in Burma and the collection has fine aerial photography of the Arakan Coast. He also  took many photographs in Simla, the hill station to which the government moved for relief from the searing heat of Delhi, as well as in Kashmir where he holidayed with his wife.

Tymms, a keen photographer , also captured on cinefilm some events associated with his work in civil aviation, as well as social occasions and holidays he enjoyed with family and friends.  His earliest film dates from 1925 and records the First African [aviation] Survey (Film 12).  There are three short black and white silent films made in South Asia in the early to mid-1930s - Films 16, 17 and 19.

Film 17 (the film can is labelled: North West Frontier Province. Kashmir. Palampur.  Simla) opens with views of the Khyber Pass and then moves to Dal Lake and Srinagar in Kashmir, and onto hill stations in  Himachal Pradesh.  It focuses on travel and landscape scenes, as well as local crafts.

Tymms and his wife Millie had become great friends with J.R.D.(Jeh) Tata and his wife Thelly during their time in India, and they returned in October1962 to participate in Air India celebrations in Bombay on the occasion of J.R.D. Tata's reenactment of the first Karachi-Bombay flight, via Ahmedabad in 1932. Sir Frederick filmed some of the celebrations in colour.   Film 8  opens on 15th October 1962 in an Air India marquee at Bombay airport and includes footage of a Burmah-Shell Aviation Service bullock cart, a De Havilland Leopard Moth dating from the 1930s and a Boeing 707. The film also includes hugely contrasting scenes of Indian women carrying heavy stone on a building site, busy street scenes, and grand buildings in Delhi.

Tymms went on to represent the UK on the Council of the International Civil Aviation Organisation (I.C.A.O.), led missions to New Zealand and the West Indies as a trouble-shooter to promote civil aviation, and was a founding member of the Guild of Air Pilots and Air Navigators. He was elected Master of the Guild in 1957.    His wide interests embraced communication technologies, satellites and space travel, and the sovereignty of space.

The Tymms collection on civil aviation was donated to Cambridge University Library by Group Captain E.A. Johnston in 1994.  Johnston's biography of Tymms, To organise the air: the evolution of civil aviation and the role of Sir Frederick Tymms, the Flying Civil Servant, was published  by Cranfield University Press in 1995, ISBN 1871315468. 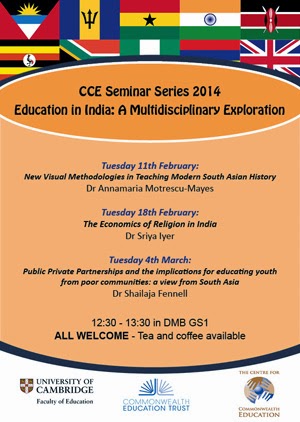 Join us for the 90th SAALG Conference which will take place on Friday 21st February at the University of Cambridge Library. The theme for the day will be 'Archives' and we will have the opportunity to learn about a variety of collections and projects - there will also be a chance to visit the new Centre of South Asian Studies building in Cambridge.

The full programme is as follows: