The Hazara in Quetta

This exhibition looks at the Hazara community in Quetta, Pakistan where some 500,000 Hazara have settled over the last century. As a religiously Shia and ethnically Turku-Mongol minority the Hazara face discrimination and over 1,700 people have been killed and more than 3,000 injured to date. Asef Ali Mohammad, a British based Hazara currently completing his photography MA at Middlesex University, has documented this – his own - community in its strength and vulnerability.
Asef Ali Mohammad was born in Afghanistan, grew up in Quetta - where members of his family live - and has lived in Britain since 2001. He won the Sony World Photography Student Focus Award in 2012; has been published in The Guardian, Newsweek and Foto8 as well as on the BBC and shown his work at Impressions Gallery in Bradford and Somerset House in London.

Tube: Canary Wharf DLR: Canary Wharf & Heron Quays.
Buses: D3,D7,D8 & 277
Note: Churchill Place is south of Cabot Square. To find the Idea Store head for Jamie’s Italian, the Idea Store is on the dockside immediately below the restaurant.
Posted by Penny Brook at 12:46 No comments:

Jenny Balfour Paul talks about her highly acclaimed new book Deeper than Indigo: tracing Thomas Machell forgotten explorer, based on Thomas Machell’s journals which she discovered at the British Library.  Hailed by AN Wilson as 'One of the most remarkable books I have ever read', it describes Jenny's own incredible travels through the Middle East, Asia and the South Pacific while following Machell’s extraordinary life and adventures. They include his eye-witness accounts of the First Opium War, travels up the Indus River, a voyage to the remote Islands of the Marquesas - where he had an affair with a cannibal princess - work on indigo and coffee plantations in India, travelling with Muslim merchants by Arabian dhows from Kolkata to Suez, and life during the Indian Rebellion. 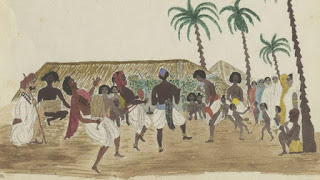 The John Rylands Research Institute is pleased to announce its latest call for Visiting Research Fellowships.

The University of Manchester is part of the prestigious Russell Group of Universities and is highly respected across the globe as a centre of innovative research. The Library’s Special Collections are breath-taking in their breadth and depth. They cover more than 50 languages, span five millennia, and are written on virtually every medium ever employed from clay tablets to digital, papyrus to pixels. Contained within the collections are some of the most significant printed books and manuscripts ever produced alongside archive collections and visual resources documenting a wealth of cultural, literary, historical and religious traditions from around the world.

The John Rylands Research Institute is a unique partnership led by the Faculty of Humanities (HUM) and the University of Manchester Library (UML). Humanities scholars, scientists, curators, conservators and digital imaging specialists are brought together to uncover, explore, unravel and reveal hidden ideas and knowledge contained within the Library’s world-leading Special Collections. The Institute welcomes applications for these Fellowships.

The closing date is Friday 27 November 2015 and further details of how to apply, including application form can be found at http://www.jrri.manchester.ac.uk/opportunities/visiting-research-fellowships/

SAALG blog readers may be interested to know that the Royal Pavilion and Museums, Brighton and Hove will be holding a conference on 21 November, 10.15am-7.45pm

For the past 100 years, the story of India’s role in the First World War has been largely forgotten, both within India and by the rest of the world. The Royal Pavilion and Museums, Brighton and Hove is bringing to life the diverse voices and experiences of individuals from India who were affected by the conflict in this major one-day conference. Discover the personal thoughts expressed by soldiers in letters home from the Brighton military hospitals, listen to the astonishing sound recordings of soldiers in German prisoner of war camps and find out about extraordinary individuals such as Sophia Duleep Singh, Maharajah’s daughter, suffragette and nurse. This international conference seeks to consider how Indian soldiers and their families have been represented in memory, literature, media and official record; and how they can or should be remembered and viewed a century on.

Anyone interested in India's role in the First World War can find articles about this in the British Library's Untold Lives blog:

Letters from Indian soldiers
The Indian sepoy in the trenches 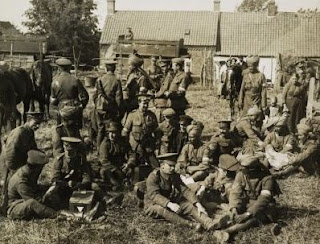 English and Indian soldiers of the Signal Troop of the Lucknow Cavalry Brigade relaxing in a farmyard at Brigade Headquarters, 28 July 1915, Photo 24/(158)  (Courtesy of the British Library Board)

12 November (at 3p.m.!): In the shadow of Mt Kailash: The politics of visual constructions in a trans-boundary cultural landscapes (Abhimanyu Pandey).
For further information about the seminar series please see http://talks.cam.ac.uk/show/index/56318 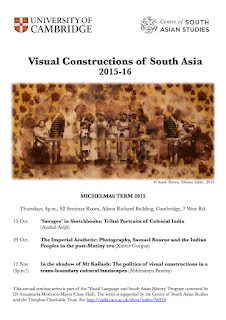 Posted by A.Motrescu-Mayes at 19:26 No comments:

"It's an archival problem": Simon Schaffer in conversation with Sujit Sivasundaram

Do read in full this fascinating conversation about the history of science at http://www.cam.ac.uk/research/features/a-world-of-science - the University of Cambridge Research Bulletin. I have pasted some highlights below.

One conundrum the researchers debated was how global narratives of science could have been missed by scholars for so long. It largely stems from the use of source materials says Schaffer: “It’s an archival problem: as far as the production and preservation of sources is concerned, those connected with Europe far outweigh those from other parts of the world.”

“If we are to de-centre from Europe, we need to use radically new kinds of sources – monuments, sailing charts, courtly narratives, and so on,” explains Sivasundaram. He gives an example of Sri Lankan palm-leaf manuscripts: “The Mahavamsa is a Buddhist chronicle of the history of Sri Lanka spanning 25 centuries. Among the deeds of the last kings of Kandy, I noticed seemingly inconsequential references to temple gardens. This led me back to the colonial archive documenting the creation of a botanic garden in 1821, and I realised that the British had ‘recycled’ a Kandyan tradition of gardening, by building their colonial garden on the site of a temple garden.”

Moreover, says Sivasundaram, the mechanisms of knowledge assimilation are often overlooked. Europeans often accumulated knowledge in India by engaging with pandits, or learned men. “The Europeans did not have a monopoly over the combination of science and empire – the pioneering work of Chris Bayly shows how they fought to take over information networks and scientific patronage systems that were already in place. For Europeans to practice astronomy in India, for instance, it meant translating Sanskrit texts and engaging with pandits.”
Posted by Rachel Rowe at 09:59 No comments: