The Horniman Museum is looking for research assistance for their upcoming project 'The Sikh Turban: Exploring an Icon of a Migratory Peoples' Identity. This falls within the Horniman's review of its anthropology collections Collections People Stories: Anthropology Reconsidered http://www.horniman.ac.uk/about/collections-people-stories which, working with communities and researchers, aims to uncover the range, scale and importance of their collections.

The aim of the Sikh & Turban project is to display an exhibition from the Horniman's collections in 2014, which will explore the turban in the context of Sikh global migration. The exhibits will demonstrate - the physical variations of turbans across the globe - consider the role of the turban in Sikh identity in relation to other head coverings such as the mitre in Europe during the Middle Ages - and examine the turban in the context of Sikh relations with Britain.


If you would be interested in helping with any aspect of the research or curating of this exhibition then please get in touch with the primary researchers Gorby Jandu gorby.jandu@gmail.com and Johanna Zetterstrom-Sharp JZetterstrom-Sharp@horniman.ac.uk. More information about the Horniman museum collections can be found on their website www.horniman.ac.uk

Posted by Helen Porter at 18:11 No comments: 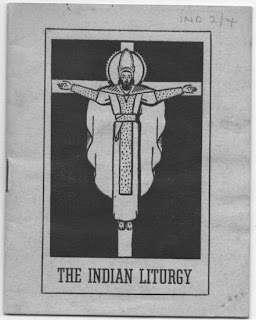 A guest post by Lucy Hughes, Archivist of the Henry Martyn Centre in Cambridge.

Readers of the SAALG blog may be interested to learn about the collection of material relating to missionary work in Southern India which is held at the Henry Martyn Centre, Westminster College. The items in this miscellaneous collection of books, articles and pamphlets were connected with the Reverend R. B. Budgett and range in date from 1913 to 1958.

The ‘Indian Liturgy’ (shown in the scanned image) is an abridged edition, revised in 1942, of the original order for the administration of holy communion sanctioned in 1922 by the Episcopal Synod of India for experimental use in the diocese of Bombay. In 1933 the order was given authorisation for use in any diocese of the Church of India, Burma and Ceylon. It is 2/4 in the South India collection. Within the same collection is to be found a folder of items relating to the Dornakal diocese. This folder includes a pamphlet entitled ‘Jungle Wanderings in the Diocese of Dornakal’ by Captain Hayne, undated (South India 3/7). Printed by the Church Army Press in Oxford, it is 12 pages long and contains 7 photographs of village life accompanying the detailed descriptions of life in this remote rural district, and the gradual infiltration of Christianity into the community.

Another item of particular interest is a note relating to a book entitled Andhra Christian Lyrics (South India 4/1). Andhra Christian Lyrics is an anthology published in Madras, 1937, of Christian verses popular in the Andhra region: they are printed in Hindi. According to a note (South India 2/8) found in the same collection, number 77 is the most precious of the lyrics in the volume. A story about its composition is recited in the note:

‘It is on God’s love and was composed when the author Gollapalli Nathaniel was bound in stocks by the enemies of the Christian religion. Gollapalli Nathaniel was a voluntary Evangelist. He learnt to read and write only after he was baptised with his wife in 1862. Constrained by the love of God he went about preaching the Gospel in the villages. In one of his preaching tours of 1869 the high caste Hindus of Nuramanda objected to his preaching in their streets, and had him put in stocks. Some women who took pity on him begged the Hindus in vain to give him food that night. In spite of pain all over the body Nathaniel composed this lyric on God’s love and sang it to the people who came to see him the next morning … The lyric is prescribed as the first lesson to all people preparing for baptism. It is taught to them with full explanation from the Bible. It is sung by Christians of all denominations in Andhra desa and almost all six lakhs of Christians in the Telugu area know it by heart. During Hindu festival times the lyric is printed on a separate handbill and is distributed to all non-Christians.’
Posted by Rachel Rowe at 14:00 No comments:

Researchers interested in issues relating to the growth of cities in south and south-east Asia may be interested in a new research group, recently established at the University of Cambridge, Cities South of Cancer (CSC).  The group is currently studying four cities: Buenos Aires (Argentina), Cali (Colombia), Jakarta (Indonesia) and Khulna (Bangladesh).

Researchers explore issues to do with globalisation and architecture, poverty and urban informality, urban growth and governance, amongst other major themes. Research extends across disciplinary boundaries constantly inviting collaborations with sociologists, anthropologists, cultural theorists, urban planners, historians, lawyers and engineers. CSC emerges as a platform for interdisciplinary and cross-sector collaboration whose aim is to develop new forms of urban practice in the developing world. Group members may be contacted at citiessouthofcancer@aha.cam.ac.uk
Posted by Rachel Rowe at 09:00 No comments:

Not Orville and Wilbur

The manuscript has been catalogued and digitised for the Sanskrit Manuscripts Project and is available at http://cudl.lib.cam.ac.uk/view/MS-ADD-01688/

Cambridge University Library’s South Asian collections grew in the 1870s when one brother Daniel Wright, surgeon to the British Residency at Kathmandu, Nepal from 1866 to 1876, collected a large number of Sanskrit manuscripts on the suggestion of his brother in Cambridge, William Wright, Sir Thomas Adams’s Professor of Arabic from 1870. Their father had worked for the East India Company and William was born in Nepal. William Wright donated many Islamic manuscripts to the Library and arranged the purchase of a significant Syriac collection.

The first Sanskrit manuscripts were commissioned copies, transcripts of early manuscripts. It was only as the project progressed that it became clear that buying manuscripts of an early date that would be taken out of use when modern copies were made was the way forward. Many purchases were made through Pandit Gunanand of the Residency, with whom Daniel Wright wrote a history of Nepal (Cambridge, 1877).

South Asian manuscripts in Cambridge University Library comprise more than one thousand documents in Sanskrit and other South Asian languages, written in various scripts on different materials, such as birch-bark, palm-leaf and paper. Many have wooden covers, some lavishly illustrated. On some there are traces of offerings made in religious ceremonies: rice, sandalwood dust and red and yellow powders. The Buddhist manuscripts were catalogued by Cecil Bendall in the late 19th century (Cambridge, 1883). What Daniel Wright collected is much wider than the Buddhist core of the collection and includes works of great rarity in different genres and on a host of subjects. Among them are some of the oldest extant manuscripts from South Asia, dating from the last centuries of the first millennium CE, collected in Nepal, the only region of the Indian subcontinent where the climate allows their survival for more than a few centuries.

This collection is now being worked on by the Sanskrit Manuscripts Project which began in November 2011, funded by an Arts and Humanities Research Council grant. The manuscripts will be catalogued and many will be digitised. Results will be collected in a multimedia archive and the records will be searchable online through the Library’s online digital library: http://cudl.lib.cam.ac.uk/. Many are already available.

This in turn is sparking a collaborative effort with Sanskritists in the UK and abroad. Research findings will be presented through academic journals and other publications, as well as in international workshops focusing on some of the religious and intellectual traditions that have played a key role in South Asian civilisation.

For more information, see the Sanskrit Manuscripts Project webpage, which has details of current work and associated events.