This paper explores the ways in which photographic representation of architectural sites became a way to mediate and give meaning to the image-maker's position at an intersection of local and imperial knowledges and affinities. In particular, it examines the photography of Robert Gill (1804-1879), a London-born military officer who came to play an important role in the systematic visual inventory of Indian topography -- most notably at Ajanta, but also at other sites in the region of present-day Maharashtra. More broadly, the paper raises questions about the ways in which we think about colonial archives, photographic authority, and modes of identity-formation available to British colonial subjects.


Free, open to the public
Posted by Farzana Whitfield at 11:26 No comments: 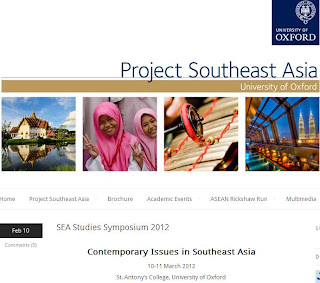 Readers who do not subscribe to the Southeast Asia Jisc Mailing list may have missed the following event, which is likely to interest many of you.

The symposium brings together some of the most distinguished scholars in the field of Southeast Asian studies, together with some of the best and brightest new academic talent, for the acquisition and dissemination of knowledge about countries in the Southeast Asian region. Topics covered during the symposium include local governance and decentralisation, marginalised communities, political economy, human development and the environment.

To download the symposium programme and to register for the event, please visit the Project Southeast Asia website at http://projectsoutheastasia.com/ . Tickets include lunch and refreshments.

“We’re Indian and African” : lecture and films on the Sidis of India

Still from the film 'Voices of the Sidis: Ancestral Links' produced by Beheroze Shroff (University of California, Irvine, USA).

Venue: Russell Square: College Buildings Room: Khalili Lecture Theatre
Type of Event: Lecture
Series: CSAS Seminar Programme
The diverse circumstances of African migration to India, their roles and achievements, their current status, issues of identity and belonging will be addressed.
The Lecture will be followed by the screening of two documentary films:

Produced by Beheroze Shroff (University of California, Irvine, USA)
This film explores the lives of the Sidis in Gujarat. Sidi men and women speak about the challenges they face as caretakers of the shrine of their ancestral saint Bava Gor. The Sidis also discuss their sacred Goma-Dhammal dance performed for devotees and spectators. The film also gives a glimpse into the spiritual legacy of the Sidis through the Parsi devotees of Bava Gor in Bombay.

Produced by Beheroze Shroff (University of California, Irvine, USA)
In this engaging portrait of an urban Sidi family in Bombay (Maharashtra), Babubhai traces his ancestry to Zanzibar. He also reminisces about his work as a stuntman in Bollywood films. Babubhai’s wife, Fatimaben, narrates her grandmother’s work in a Hindu royal court. Their daughter, Heena, speaks about issues of identity in contemporary India. 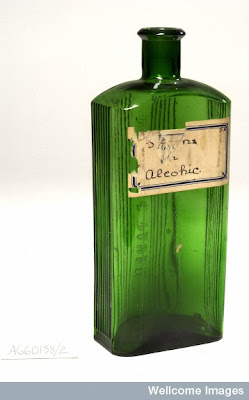 This week I’ve been looking at the Chemical Examiner’s reports, which are among the remaining medical items in the National Library of Scotland's India Papers collection.

The NLS plans to put in a bid to the Wellcome Trust to have these digitised and added to the Medical History of British India website. The NLS holds reports dated 1874-1942 from the Punjab, Burma and North-West and Central Provinces and Oudh.

The Chemical Examiners gave independent scientific advice to the Criminal Justice Administration System. The first laboratory was established in Madras in 1849, with one formed in Kerala in 1890 under the orders of Government as part of the Health Department.

The reports include short notes on the more important medico-legal cases, including strychnine poisoning and a case of an apple tart laced with croton oil, a ‘drastic purgative.’ The cook had poisoned the tart, which was served up after a cantonment dinner party (Report of the Chemical Examiner to Government, North-West Frontier Province, 1930, shelfmark: IP/29/CB.3).

Hair was also used to detect crime, examined by microscope and ultra-violet light to identify its origin. The work of the American scientific crime detection lab in North-Western University was of interest in India as ‘hair-rings’ could show the age of a human. Hair was as important as a finger-print in tracing criminals, Dr. Hood claimed.
(Report of the Chemical Examiner to Government, North-West Frontier Province, 1932, shelfmark: IP/29/CB.3).

The Chemical Examiner’s Laboratory still exists at Kerala and its work is very similar to that of last century.


The Cambridge Asian Archaeology Group is a discussion group based in the Department of Archaeology and the McDonald Institute for Archaeological Research at the University of Cambridge.  It organises regular seminars and lectures in Cambridge, including several likely to interest readers of this blog.

For this term's programme of events, see:
http://www.mcdonald.cam.ac.uk/events/asian/

The next talk on South Asia is on Monday 12th March 2012, 4.00 - 5.00 pm,  in the South Lecture Room, Division of Archaeology, Downing site, Cambridge.  Professor Adam Hardy of Cardiff University will speak on the topic:
Temple, Template, Text: making temples in medieval India.    He writes...

At Bhojpur in central India a gigantic temple attributed to the renowned Paramara king Bhoja was left unfinished in the mid-eleventh century. Quarries and incomplete architectural parts are scattered around the temple, and engraved on the rocks are numerous architectural drawings which have been documented for the first time. Ascribed to the same monarch is the Samaranganasutradhara, a Sanskrit treatise on architecture. For the first time its prescriptions are being translated into architectural drawings, a necessary first step for discussing the relationship between a canonical text and the practice of architecture. The talk will discuss how medieval Indian temples were designed, bringing together the drawings, the text, and the evidence provided by buildings themselves.

You are invited to "The Colonial Eye: British Empire images of the Punjab, India 1912 – 1947". On Sunday 19th February 2012 at 2pm (Free, but booking is required)at Phoenix Cinema 52 High Road East Finchley London N2 9PJ 020 8444 6789 www.phoenixcinema.co.uk As part of the Phoenix ' From the Archives' series I have curated a series of short films produced during the British rule of India with a focus on the Punjab. The screening will bring together public information and travelogue films found in British public archives and rarely seen on the big screen. The public information films selected are examples of state propaganda used to form public opinion, a practise still prevalent today in regions such as Afghanistan, Pakistan and India, even in this era of digital media. The travelogues selected are personal observations of places and people. Screened together they form a visual essay of Punjab as written by its rulers and administrators. The screening will be followed by a panel discussion with four specialists on South Asian film, popular culture and history: Dr Virinder Kalra of the University of Manchester, Dr Yasmin Khan of Royal Holloway, University of London, Dr Anandi Ramamurthy of the University of Central Lancashire and Dr Richard Osbourne of Middlesex University.
Posted by Jan Usher at 13:23 No comments: