** NB Booking for this event has now closed **

The 2018 South Asia Archive and Library Group conference, will take place at the Queen’s Gallery, Buckingham Palace, on Friday 6th July, from 1pm to 7pm.

The Queen’s Gallery upcoming summer exhibitions both relate to South Asia (Splendours of the subcontinent: four centuries of South Asian paintings and manuscripts and Splendours of the subcontinent: a prince's tour of India, 1875-6) and we are very pleased to be able to hold our conference at the gallery to coincide with them. Naturally, there will be a chance to see the exhibitions and the talks will all focus on South Asian material in the Royal Collection.

The detailed programme is as follows:

18.00-19.00   Private view of the exhibition Splendours of the subcontinent: four centuries of South Asian paintings and manuscripts

Please confirm your attendance by emailing Emma Mathieson (emma.mathieson AT bodleian.ox.ac.uk). Please advise us of any dietary requirements in your message.

The closing date for booking will be Thursday 14th June.

Unfortunately, any cancellations after that date will incur a catering charge, for which we will have to invoice you.

We look forward to seeing many of you in July!

Posted by Emma Mathieson at 11:04 No comments:

The eight books given by William Martin McNeill to the Archives of the Centre of South Asian Studies are one of the smaller donations to the Centre but cover forestry, plant biology and the economic background in Ceylon in the 1920s. Five of the books are only located in the Centre but directories such as The Times of Ceylon Green Book and L.J.B. Turner’s Hand book of commercial and general information for Ceylon are also held in the Cambridge University Library, and an edition of H.W. Codrington’s Short history of Ceylon is held in the History Faculty Library.

William Martin McNeill worked for Colonial Forest Service between 1922 and 1938. He served as Assistant Conservator of Forests at Kurunegala, and was acting Captain and A.D.C. to the Acting Governor Mr (later Sir) Bernard Bourdillon, serving twice: April 1930 - September 1930 and again February - March 1931. Various boxes of his papers and photographs are also held in the Archives.
One of the books unique to the Centre is Ceylon trees by T.B. Worthington, with photographs by the author. Colombo [Ceylon] : Colombo Apothecaries' Co., 1959 given to W.M. McNeill MBE TD with the author’s compliments (Archive McN 2). Each tree image has names in different languages and the use that can be made of the timber. 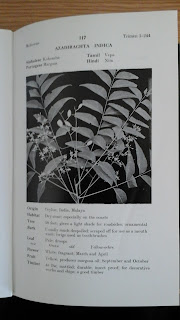 Other unique books are :

John Abercromby Alexander (b. 1854) was appointed Acting Forester in Ceylon's North-Central Province in 1886. He may have been resident in Ceylon earlier, possibly engaged in a planting enterprise. Alexander served as Forester, North-Central Province, 1887-88 and then as Assistant Conservator of Forests, Central and Southern Provinces, from 1889 until 1893, when he left the forestry department. He appears to have remained on the island until around 1896. He joined the Royal Colonial Institute in 1892. Abercromby lived at Venture Estates, Kalthuritty, Travancore, India, 1896-1898.
Posted by Suzan at 09:35 No comments:

Christopher Lorimer was employed with Steel Brothers at their rice-mills in Rangoon from 1926 to 1942. He left Burma during the evacuation in 1942, using the Tamu route into India.
The papers Christopher Lorimer donated to the Archives of the Centre of South Asian Studies consist of eight boxes covering the period 1695-1944.  They include letters to his mother (1929-30) and his diaries which cover the whole of his service in Burma (1925-42) and give an insight into the social and business life of contemporary Burma ;  historical documents - the nine army commissions of the East India CO., conferred on Colonel John Crow (1779-1813 and a distant relative) which cover his career from Ensign to Colonel ; and, relating to the Mutiny period in India, the papers of Major Laughton, Chief Engineer at the siege of Delhi until 22 June 1857. He also gave 57 photographs relating to Burma.
He gave twenty seven books to the Archives, the earliest is An account of an embassy to the kingdom of Ava : sent by the Governor General of India in the year 1795 by Michael Symes. London : Printed by W. Bulmer and Co.; and sold by Messrs G.&W. Nicol and J. Wright, 1800 (Archive LOR 22)

In addition to books on the history of Burma and Steel Brothers and the Bombay Burmah trading company he also gave a book by B.E. Smythies, Birds of Burma containing 31 coloured plates from paintings by A.M. Hughes. Rangoon : American Baptist Mission, 1940 (Archive LOR 19) with a note on the fly leaf that it has been kept safe for him during the occupation of Burma and his name erased.