The British Library celebrates Rabindranath Tagore, with two performances of his greatest stage play The Post Office, and a night of poetry in English and Bengali, set to subtle jazz improvisation by Zoe and Idris Rahman.

Marking the 150th anniversary of the birth of the great Indian writer and Nobel laureate Rabindranath Tagore. Written in 1912, The Post Office, rich in symbolism and allegory, is a play about man's passionate cry for spiritual freedom. Anita Desai called it 'as modest as a dew drop, as profound as the ocean.' Gandhi was spellbound by the play in Calcutta in 1917. Mixing simplicity with sophistication, its universal appeal has made it a world classic. Translated, and with a pre-performance talk by William Radice. Directed and produced by The Live Literature Company. www.liveliteraturecompany.co.uk

An opportunity to appreciate the poetry of the great Rabindranath Tagore, some of the most haunting and passionate in Indian and world literature. His ceaselessly inventive and remarkably modern verse may reflect on love and human yearning, on a universe both eternal and transient, or the simple joy of watching a grandchild play.

New translations over the last three decades have revealed this modernity. Our choice of poems for this programme will draw on William Radice's Selected Poems of Tagore (1985), his translation of Tagore's collected brief poems (2000) and his new translation for Penguin India of Tagore's most famous book, Gitanjali. Jazz improvisations by Zoe Rahman (piano) and Idris Rahman (saxophone) will connect the Tagore of 1912 with the Tagore of 2011 and the years to come.

Sri Lanka at the cross-roads of history 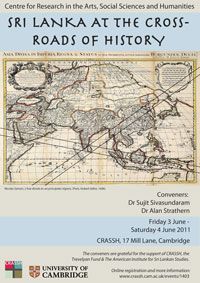 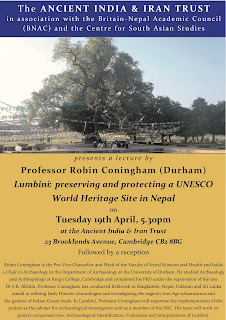 Professor Robin Coningham (University of Durham) will be giving a lecture at the Ancient India and Iran Trust, 23 Brooklands Avenue, Cambridge on Tuesday 19th April 2011 at 5.30 pm.  Admission is free and the lecture will be followed by a reception.

The lecture is being held in association with the Britain-Nepal Academic Council (BNAC), the Centre of South Asian Studies (CSAS) and the Centre for Research in the Arts, Social Sciences and Humanities (CRASSH) Nepal Study Day http://www.crassh.cam.ac.uk/events/1580/

Cambridge University Library and the Centre of South Asian Studies in Cambridge are delighted to announce the purchase of the The Times of India historical database covering the period 1838-2002.  The newspaper provides a huge resource for modern Asian studies, economics, development studies and politics generally, since the newspaper covers Pakistan, Afghanistan, Sri Lanka and all the countries of South-east Asia, quite apart from relations between India, a growing world power, the USSR (Russia), Britain and the USA.

The ProQuest database incorporates the Bombay Times and Journal of Commerce (1839-1859) and Bombay Times and Standard (1860-1861), as well as the Times of India (1861-current).  The Times of India is often reported to be "the world's most widely circulated English daily newspaper", and the database is certainly wide-ranging in its subject base as well as its geographical content.  Researchers studying topics as diverse as comparative religion, the Indian film industry,  the rise of Pakistan as a nuclear power, or the creation of Bangladesh will find rich resources, as will family historians or lovers of cricket.

The database allows users to browse complete issues of newspapers from cover to cover or to cross-search 164 years of newspapers.  Searches can be restricted to different parts of the newspaper, and limited by author, topic, date or date range. It is possible to view photographs, cartoons, obituaries, marriage announcements and advertisements as well as editorials and articles.  Relevant articles can then be printed, emailed or downloaded in pdf format and citations stored in a number of styles.  The 'My Research' feature allows users to track searches, save articles, create bibliographies and web pages.  The database can also be searched simultaneously with the New York Times, Wall Street Journal and Washington Post historical databases, resulting in some fascinating comparative reportage.

The database may be located from the Centre of South Asian Studies website - http://www.s-asian.cam.ac.uk/links.html#Newspapers
and from the University Library's Electronic Resources directory under newspapers, ejournals or databases, http://www.lib.cam.ac.uk/electronicresources/fulllist.php?search_term=T
Select Times of India from the list, then select News - The Historical Times of India from the drop-down list of databases.
Posted by Rachel Rowe at 17:29 No comments: