Call for papers for 2016 conference on South Asian manuscripts

A panel at the European Conference on South Asian Studies, Warsaw, Poland, 27-30 July 2016 PROPOSAL SUBMISSION DEADLINE: 30 November 2015 Convenors: Neeraja Poddar (Philadelphia Museum of Art) and Arthur Dudney (University of Cambridge) The papers in this panel will explore the themes of copying, repetition and reproduction in the context of early-modern South Asian manuscripts in order to understand how such books were valued, used and disseminated. We hope to include manuscripts in both pothi and codex format—with and without illustrations—ranging from literature and religious treatises to dictionaries and indexes. Common to them is the fact that multiple versions and editions of each were made through copying by hand. The result of such non-mechanical reproduction is that copies might not be "perfect" with variations introduced by artists and scribes, either deliberately or inadvertently. The purpose of this panel is to explore the significance of such variations. Rather than thinking of them as merely discrepancies or mistakes, we regard them as junctures where the authors' or artists' engagement with contemporary sectarian concerns, literary trends, artistic strategies and popular culture may be manifest. Papers might compare different editions or versions in order to investigate issues such as: What is the core of a text? Which viewpoint is preferred at a particular historical moment? How are narratives transformed as they are copied? What is the impact of scribal error when such an error becomes sanctified by usage? We invite proposals from scholars who work in a variety of disciplines including Art History, Literature, and Religious Studies, especially welcoming proposals that draw upon methodologies from Digital Humanities. To submit a proposal, go to http://www.nomadit.co.uk/easas/ecsas2016/cfp.shtml. Our panel is number P33. Please contact either of the convenors at the links above if you have any questions. Please note that in order to attend the conference you have to be a paid up member of the European Association for South Asian Studies (you can join here: http://www.easas.eu/Becomeamember).

The Alkazi Foundation for the Arts in collaboration with the National Museum and Archaeological Survey of India will be presenting the exhibition "Imaging the Isle Across: Vintage Photography from Ceylon" (see poster attached).  The exhibition will be inaugurated on Saturday, 26 September 2015 at 5pm at the National Museum Auditorium. The exhibition is a partner event of the Delhi Photo Festival, 2015.
The Exhibition: The history of photography in South Asia is a story of itinerant practitioners, seeking to expand the eye of the lens by exposure to the farthest corners of the world. Though Ceylon came under British rule only in 1815, it followed the maritime expansion of the Portuguese, the Dutch, Danes and the French – the first of which identified it in their sea-charts as Zeilon, from which the modern name Ceylon was derived and maintained till 1972.  Featuring vintage photographs drawn primarily from the Alkazi Collection of Photography, this exhibition takes its viewers through a mapping of sites as well as visual tropes and themes emerging from early photography via diverse mediums of production such as albums, illustrated books and postcards. These traces remain foundational in generating a imagistic canon that etched the life of a swiftly transforming country, as did the coming of a modern, pictorial language instituted by Lionel Wendt, the art photographer and patron.
We are extendedly grateful to the contributions and support of the University of Cambridge, Centre of South Asian Studies; the India-Sri Lanka Foundation, Ismeth Raheem, Annamaria Motrescu-Mayes, Dominic Sansoni and Anoli Perera.
Sincerely,
Alkazi Foundation for the Arts
www.acparchives.com 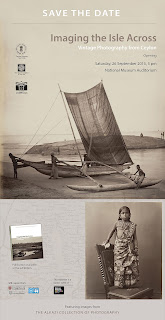 Posted by A.Motrescu-Mayes at 21:05 No comments:

Applications are invited for a one-year fixed-term Sanskrit post at the Bodleian Library in Oxford - the
John Clay Sanskrit Librarian (Job Ref: 119208)

Please note the closing date is this week, 18th September 2015.